When you hear “Xbox 360,” a couple of things come to mind. Thanks to a number of factors, including a rush to be the first out the door for the next gen, is “RRoD.” Despite the thousands of hours of enjoyment you might have gotten from your 360, the one thing you’re probably going to remember well into this upcoming generation (and beyond) is the day your launch console bit it. And the day that its replacement bit it. And the day that replacement bit it (and so on).

The other blemish on an otherwise fine piece of hardware (ha) is the pack-in headset, which has become more or less a joke in its own right over the years. Is anyone still using the original Xbox Live headset that came with their launch console? Is anyone even still using their second one? I’ve probably gone through more than most (due to a couple of overenthusiastic puppies eating parts of three different headsets before they finally got out of their “chew on everything in sight” phase), but the fact is that the OEM Xbox Live headset just isn’t a high quality piece of hardware.

So where do you look if you want to escape the never-ending cycle of dropping $15-20 on an OEM headset over and over and over? Well, it depends on exactly how much money you feel like spending. Believe it or not, there are a lot of options out there for Xbox Live headsets, and you can do pretty well (at least better than the Microsoft-branded piece of junk you have) for relatively little.

Check out the reviews below, along with our headset comparison matrix, to help you make a choice.

The Plantronics Gamecom X10 is the first headset I got after I finally decided to quit giving Microsoft my money. This isn’t exactly a high end headset, but it had a few things going for it. Mainly that it cost less than twenty dollars, and Amazon Fresh had it in stock and brought it with my morning groceries, so I was able to get right back to yelling at strangers on the Internet the very next day.

For the price, which is currently about $15, you won’t do much better than the X10. This headset isn’t overflowing with features or anything, but it has everything that the OEM version does (in-line volume and mute control, single on-ear headphone, etc), and it even has a similar design. This is a bare-bones Xbox Live headset that gets the job done and not much else.

The main thing that the Plantronics Gamecom X10 has going for it, aside from the price point, is build quality. If I hadn’t stepped on mine, I’d probably still be using it today. Even then, the headphone just popped off the headband, and I was able to pop it back in. I had to step on it a second time to actually break the wires off the headphone, at which point I didn’t feel like soldering it back together, so I moved on. 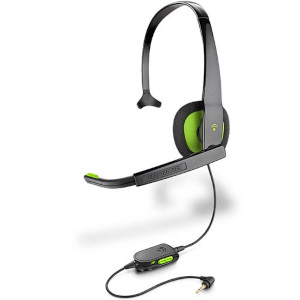 If you’re ready to step up to a headset that will let you listen to both voice chat and the game you’re playing, Mad Katz’s Xbox 360 AMPX will do the job without setting you back too much. The price tag is only about ten dollars more than you’d pay for a traditional mono Xbox Live headset, and that money gets you a few options that you wouldn’t otherwise have.

Since the Xbox isn’t capable of pumping game sound through the headset port in the controller, you have to tap into the regular audio outputs if you want to listen to your game over a headset. To facilitate that, headsets like the AMPX provide pass-through RCA cables that you just hook into the left and right channel RCA outputs on your Xbox 360 media dongle. In order to still work as a headset, you also have to plug an additional cable into the controller.

The AMPX is an amplified headset, which is something you need if you’re pulling audio from the RCA outputs from your Xbox. It also has an inline volume control that allows you to adjust the chat and game volumes separately which is a nice touch. If a headset doesn’t have that function, you have to go into the menu options any time you want to turn the game volume down or the chat volume up.

The main problem with the AMPX is that you basically get what you pay for. While the headset works great, a lot of users report relatively poor build quality. Even if you take good care of it, you’ll end up dealing with broken wires and other malfunctions at some point. For the money, though, it’s hard to beat the feature set. 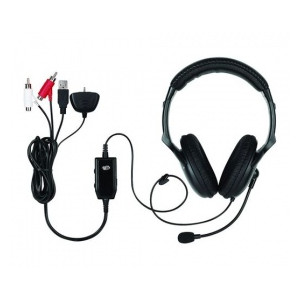 The Ear Force X12 is a headset that offers all the same features of the AMPX, but with two notable differences: the build quality is better, and it costs twice as much. This is a USB-powered, amplified stereo headset that includes an in-line volume control for both game and voice chat, and it also has variable bass boost. Another feature that may push it over the top for you is a built-in mic monitor. This feature allows you to hear what you’re saying, which drives me nuts personally, but some people really like it.

If you’re looking for a sub-$50 headset for your Xbox 360, you can’t do much better than Turtle Beach’s X12. The mic is a little on the sensitive side, but you’ll have to drop a lot more than fifty bucks if you want a noise-cancelling mic you can take into LAN parties without picking up background noise. The headset also lacks inner cushions inside the ear cups, which may be uncomfortable for some people. The cushions are replaceable, so you may be able to take care of that if it becomes an issue. 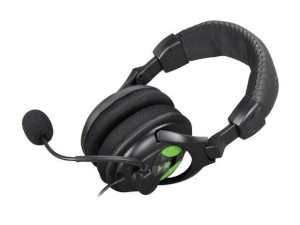 If you’re really ready to step up your game, and you have a few bucks burning a hole in your pocket, then a headset like the Ear Force X42 takes it to the next level without being too expensive. This headset runs about $120, but you get a lot for that price. The headset is wireless, so you don’t have to deal with the 12+ feet of tangled cords that you get with other Xbox Live headsets, but it’s more than just your basic wireless headset. It operates on either 2.4 or 5 GHZ, so you can switch if you’re getting too much interference from other devices in your house.

The X42 provides Dolby Surround Sound (and an optional optical connection), which you can even use to listen to TV and movies if you hook everything up right. It also has multiple equalizer presets, so you can tweak everything to your liking (and even have different settings for gaming and watching movies if you want.) It also has the independent game and voice volume controls found in lower-priced models, a mic monitor, and bigger (50mm) speakers than a lot of other Xbox Live headsets. 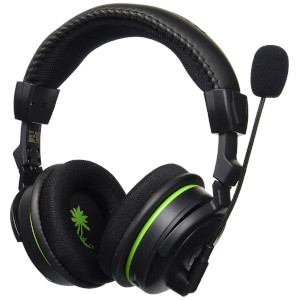 Like the X12, you may find the ear cups somewhat uncomfortable during marathon play sessions. You may also experience more cutting out/dropping than you’d like, although that will be different for everyone based on how much interference there is in your gaming room, how far you are from the transmitter, and other factors.