Nowadays most of us spend more time with the console than at poker tables or in a casino. But why not both? After all, who doesn’t sometimes feels like playing a game of cards or roll a the dice? If you want to feel that casino atmosphere in the comfort of your home using the Xbox, be sure to check out this article.

The following games are not available in real money online casinos. However if you would like to try some real money casino games you should choose a safe casino site. This guide will help you with that.

“Four Kings Casino and Slots” is made by Digital Leisure Inc., producer of 80s classics such as “Dragon’s Lair” and “Space Ace.” It’s a free MMO-style casino simulator where you have options to create and design and personalize your character and play with friends. “Four Kings Casino & Slots” has quite a large community worldwide, so there is a good chance you will find some buddies to gamble within the virtual casino. On top of that, you’ll find regular updates and in-game events that keep the game fresh. The game is free to play, but you’ll need to invest some cash in microtransactions if you want to be a daily member of this virtual casino.

The next game is a mashup of the classic fighting game “Street Fighter II” and… Blackjack. Players can choose from 12 characters to fight with; only instead of fists, we use cards. Sound interesting, right? The game offers a ranking system where you can try yourself against players from all over the world. Graphics and an unconventional competition system make “Super Blackjack Battle II Turbo Edition” one of the more exciting ways to play competitive Blackjack ever-made. However, it is worth noting that the game still has some minor bugs (such as glitched trophies), and the developers are unlikely to do any further updates.

We recommend this one to all board game enthusiasts! Besides classic casino games like Roulette, Texas Hold’em, and Blackjack, you can also play some exciting board games and classics like Bingo! “Vegas Party” offers a 4-player Multiplayer mode and features an uncomplicated in-game interface. In addition, there are as many as 17 different casinos that you can go to. The game developers (Funbox Media) also focused on the humorous aspects, while we assure you that the jokes presented in the game are suitable even for the youngest. That said, “Vegas Party” is an excellent alternative to a family board game evening. The game also requires astute token management, so be vigilant all the time to don’t get kicked out of the casino.

“Casino Nights” is a minimalist production from indie game developer GZ Storm. You can play all popular casino games in PvP mode, meaning you can play against players from all over the world. The 2D graphics may not encourage you to play, but you have to consider that the game came out over 10 years ago. It certainly stands apart from other games in terms of the number of features, but that might be a real advantage for players who appreciate minimalism. “Casino Nights” costs just one dollar, but if you’re not sure about buying it, you can always try the free demo available on the Xbox Games Store.

Is there a Poker Game for Xbox One?

You can play Texas Hold’em in three of the games mentioned above — Four Knights Casino & Slots, Vegas Party, and Casino Nights. However, these are all somewhat truncated versions, so players looking for games focused on poker on Xbox One should look at two specific titles — Pure Hold’em and Poker Club.

A game made for real Texas Hold’em enthusiasts. Here you’ll find a pretty realistic representation of a poker table and an 8-player multiplayer tournament mode that you can invite friends to or play with other poker fans. The gameplay using the controller is extremely smooth; unlike in other Casino Games we’ve mentioned, we don’t have to use any combinations to make moves like “fold” or “check.” However, we are not convinced about playing against AI (Artificial Intelligence), as it is far from perfect. The game also happens to crash due to some minor bugs that are unlikely to be fixed (the game is already 6 years old). Consider these factors before buying the game, as it costs $20 and has some microtransactions that you may not be able to circumvent if you decide to play long term. Although, as we mentioned — the multiplayer mode is excellent, especially if you want to host an online tournament with your friends. The developers (VooFoo Studios) have also created a game for Pool enthusiasts called “Pure Pool,” which is also available for Xbox One and costs just $10. 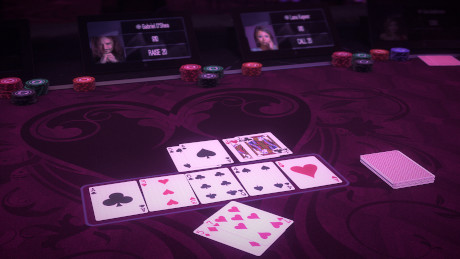 If you enjoy watching the biggest poker tournaments such as WSOP or the WPT, or maybe you’d like to play in one yourself, “Poker Club” might be a perfect pick for you! This one is for people who value the competitive aspect of poker the most. The game offers as many as 10 Texas Hold’em tournament modes and an extensive ranking system; all this in 4K graphics. The scenes you play on are inspired by those of the biggest tournaments, making it highly immersive at times. The game is relatively new, as it’s on the market since November 2020, and its community is constantly growing. The producer of “Poker Club” is Ripstone Studio, previously involved in developing 3D chess games.

As you can see, there are plenty of options for an exciting casino experience without leaving your room. Moreover, you can play most of these games with the youngest members of your family that you wouldn’t be able to take to a regular casino! We hope this article has been helpful to you and that you will enjoy your time at the virtual casino, whichever of all these games you decide to play.